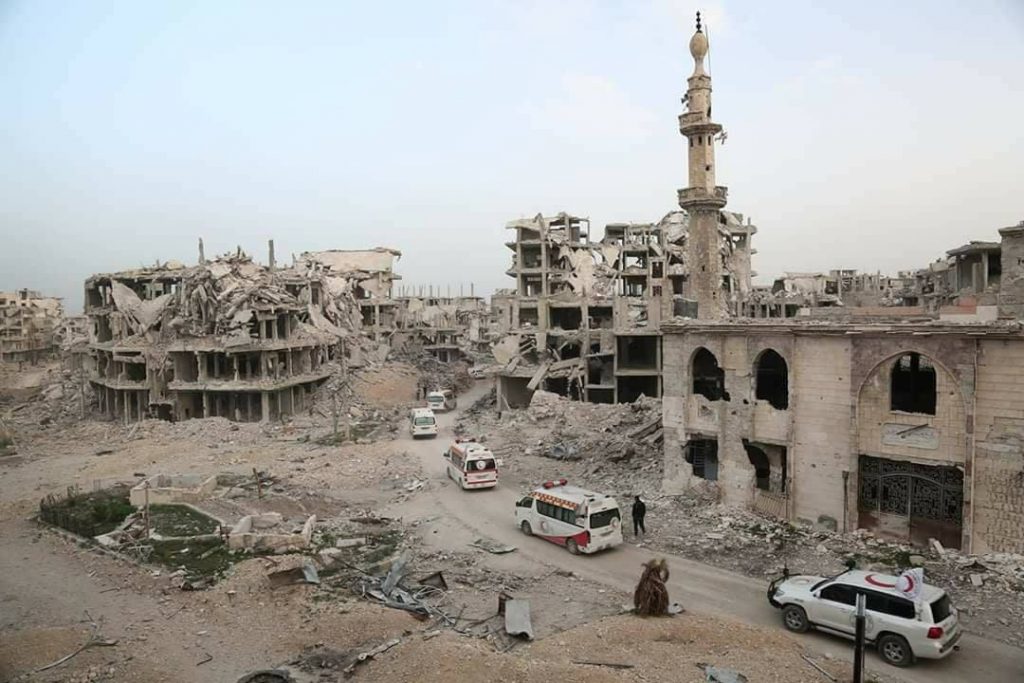 Eastern Ghouta has been under siege since November 2013. This area in Rural Damascus hosts an estimated population of 393,000, including some 99,500 internally displaced people (IDP). Peace SOS has close contacts with the representatives of Rural Damascus, civilians and NGOs in Eastern Ghouta and supports their call to protect civilians, halt the bombings, and provide humanitarian aid.

Since mid-February 2018, the Syrian government has intensified its war efforts. This has led to more than 1,700 civilians being killed, over 45,000 being displaced, and thousands more trapped. Despite resolution 2401 of the United Nations for a ceasefire and humanitarian aid in Syria, and the agreement to maintain inclusive peace talks (resolution 2254), the fighting continues to increase and little humanitarian aid has managed to reach Eastern Ghouta. The rebel-held areas at this moment are Douma (held by Jaish al-Islam), and another part of Eastern Ghouta that includes four towns: Zamalka, Jobar, Ein Terma, and Arbin, some of which have been hit by airstrikes in the last few days (see also ThinkProgress). The government of Assad has taken over Harasta, forcibly displacing 5,009 persons, with 20,000 persons able to stay.

Fears of a massacre in Douma

In the last week of March, Akram Tuameh, Vice President of the Interim Government of Syria, told the EEAS and Peace SOS that he fears a massacre and widespread rape in Douma if the Syrian regime army occupies it. In Douma, a ceasefire agreement with the Syrian government is hard to achieve since the fighters of Jaish al-Islam (The Army of Islam) do not want to be forced to evacuate to Idlib. Al Nusra and Al Ahrar, both with a tense relationship with Jaish al-Islam, are present in Idlib.

Men being separated from women

Another point we are extremely concerned about is that all men aged between 18 and 40 have been separated from the women. They are based in camps under the control of the Syrian regime, such as Al-Dwir center and Adra center. We are concerned for the well-being of the men in these camps and strongly advice the UNHCR Damascus to visit these camps and install a permanent office there. Women over the age of 15 who were not married were not allowed to leave the camp.

150 activists from Sakaba and Hamuriya have been arrested by the Syrian army. This is despite the fact that Russia guaranteed that they wouldn’t be arrested. We fear for their safety.

Call for peace and humanitarian aid

At Peace SOS, we support the call of the people in Eastern Ghouta to protect civilians, halt the bombings, provide humanitarian aid, and prevent forced displacements, as well as to uphold United Nations resolutions 2401 and 2254. In addition, as we have suggested, we argue that UN offices should be installed in camps held by the Syrian regime such as Al-Dwir and the Adra center.

Let us hope and pray that peace and humanitarian aid come soon for the people in Eastern Ghouta, before it is too late.