Let the Israeli and the Palestinians lead the Peace Process 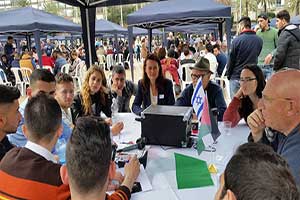 Picture: At the public peace negotiations organized by the NGO ‘Minds of Peace’ in March 2017 Tel Aviv

Gaza, West Bank and Lebanon refugee camp protests formed — several Palestinians recently died and an Israeli policeman was wounded in a Palestinian knife-attack — after President Trump’s decision to move the embassy of the United States to Jerusalem from Tel Aviv. He publicly recognized Jerusalem as the capital city of Israel. Jerusalem is a holy place for people across the world of multiple religions- Christians, Jews and Muslims. The Israeli cabinet was working in the beginning of 2017 to anchor in law Israel as a Jewish state. According to our opinion, the status of Jerusalem should be decided through serious negotiations between the Israelis and the Palestinians. This article is a plea for peace and gives suggestions to it.

The conflict between Israelis and Palestinians began in the mid twentieth century, making it challenging — but not impossible — to solve. President Trump has stated he wants to achieve peace in the Middle East. This would be a great achievement indeed, but requires the full participation of the Israeli and the Palestinian people themselves with support by the international community. Uniting the Israeli and Palestinian people is possible and the following points contribute to the opportunity for unification.

First, the initiatives of Israeli and Palestinian people who want to bring peace in the Middle East deserve global attention and support. Grassroots peace making initiatives are active and generating momentum in the Middle East; two such initiatives are enacting massive movement forward. Minds of Peace organizes bottom-up public peace negotiations between the Israeli-Palestinian people in Tel Aviv. During these public negotiating congresses, Israelis and Palestinians very often meet for the first time and come up with peaceful activities, such as eating together and providing peace making education. Minds of Peace wants to organize a major Israeli-Palestinian public negotiating congress, a peacemaking institution. Women Wage Peace leverages the power of engaging women and youth in the peace making process. In October 2017, thousands of Israeli and Palestinians walked 16 days across the country of Israel and Palestine, arriving in Jerusalem and presenting a signed charter to the Israeli government that demands an end to the violence through an Israeli-Palestinian peace deal.

It’s critical that these massive, powerful grassroots initiatives receive international support and endorsement by the international community. We believe that an effective peace process is a combination of a coordinated bottom up approach in conjunction with a top down approach (political elite diplomacy). Additionally, it requires a fair, unbiased peace mediator, that monitors and discusses peace treaty options with the Israeli and Palestinians.

Second, it should be kept top of mind that the current conflict in Israel-Palestine is nearly seventy years old, yet conflict in this region spans centuries. There are unification first steps that need to be taken in the peace process in order to address critical humanitarian issues and violence. Such steps may be the providing of humanitarian aid and facilitating joint reconstruction to restore Gaza and stimulate peace initiatives in the West Bank.

It is our contention that, in order to bring peace to the Middle East, the Israeli and Palestinian people should be empowered to lead and guide the peace process themselves while being supported by the international community.