Let’s turn back the Doomsday Clock 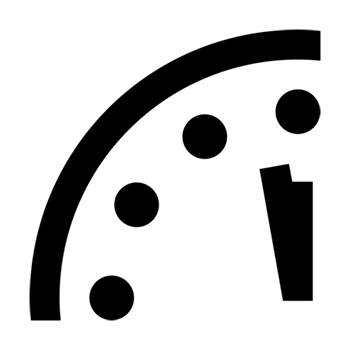 The symbolic Doomsday Clock is set at 100 seconds to midnight, where midnight represents humanity obliterating itself. According to the statement of the president and CEO of the Science and Security Board Bulletin of the Atomic Scientists, Rachel Bronson, there are two reasons for this: “The risk of nuclear accident seemingly growing by the day as the time available to responsibly stem the climate crisis shrinks just as quickly.” In this opinion article, the focus will be mainly on nuclear weapons.

In the Netherlands, a report of the Advisory Council on International Affairs indicates that the number of nuclear weapons worldwide has been reduced from an estimated 70,000 during the heyday of the Cold War to less than 15,000 today. Although this may sound somewhat reassuring, former Dutch diplomat Edy Korthals Altes pointed out in the Dutch newspaper, de Volkskrant, that the word “nuclear weapon” in this report also includes the water bomb (the thermonuclear weapon). This weapon has unimaginable destructive power – according to him, reliable estimates indicate 500 to 1000 times stronger than the bomb on Hiroshima. The total number of deaths from the attack on Hiroshima is set at 237,062, which I think is a huge number and very saddening. Korthals Altes therefore fears that a future total war will be all- destructive. He is not alone in that analysis.

Alex Wellerstein and his team from Princeton University developed a simulation “Plan A” for a plausible escalating war between the United States and Russia using realistic nuclear force postures, targets and fatality estimates. It is estimated that there would be more than 90 million people dead and injured within the first few hours of the nuclear conflict. More victims would follow in the days thereafter due to radiation and a nuclear winter, which will cause food insecurity.

The risk of a confrontation between two nuclear superpowers is conceivable, according to a recent interview with Russian ambassador Shulgin in Diplomat Magazine. This was almost the case when the United States, France and Great Britain carried out missile attacks on Syria in connection with the chemical attack on Douma. There were and there still are Russian troops in Syria. They would feel compelled to respond if hit, according to Shulgin. He compares the situation to the 1962 Cuban Missile Crisis, when tensions between the United States and the Russian Federation were so high that nuclear war seemed imminent.

Nevertheless, the world’s most powerful political leaders are still considering the nuclear arms race as a race which can be won by outspending other countries which possess nuclear weapons. This was stated by Special Presidential Envoy Marshall Billingslea in an online presentation to a Washington think tank according to Reuters News. The good news is that he added “we would like to avoid it.”

What is needed now is to face the current reality and to show courage. However, facing current reality is not as easy as it seems, as is outlined also by Jamais Cascio, who explains what coronavirus teaches us about doomsday denial. He mentions in his article that we have already become used to crisis denial regarding slow-moving, hard-to-fully-grasp threats like global warming.

I live in hope. Hope that world leaders will face the current reality and act accordingly just in time.

We need the courage to focus together on the survival of humanity as a whole. World leaders need to unite. As I indicated earlier, technology and geopolitical developments are accelerating. It is 100 seconds to midnight.

Governments need to eliminate nuclear weapons, sign the Treaty on the Prohibition on Nuclear Weapons, and encourage other countries to do the same. They have the support of a large part of their people. Research of the International Red Cross, carried out by Ipsos Switzerland, showed that 84% of the millennials in 16 countries are of the opinion that the use of nuclear weapons is never acceptable. The United States of America, the United Kingdom, France and Russia took part in this research.

According to a just-released report of the International Campaign for the Abolishment of Nuclear Weapons, nine countries spent 72.9 billion dollars on nuclear weapons in 2019. As I elaborated upon in the previous sections, the risk of a nuclear war and its consequences is too high. We are better off investing this money in fighting hunger, stemming the climate crisis and building a more peaceful world. Towards: A World in Which All Children Can Play.

This article contains two sections of an op-ed by May-May Meijer that was published in the Dutch newspaper Het Parool.