A Bio-cultural Heritage for Humanity

From October 19 to 23, 2022, Chaikuni’s Permaculture Center was hosting an exceedingly important event with over 40 participants from 22 representative indigenous organizations from Brazil and Peru, their allies, as well as donors from the United States and Norway(1). The goal of the event was to further define key aspects of an initiative which aims to perpetually protect an area of largely intact rainforest the size of Great Britain, home to the largest number on earth of indigenous peoples living in voluntary isolation.

The border region between Peru and Brazil consists mainly of very remote and still largely intact dense Amazonian rainforest, the latter being a direct consequence of the historic, cultural, economic, and ecological interrelationship of the indigenous peoples with the forest. These remote forests are also home to the greatest number of indigenous peoples on the planet which chose to live in voluntary isolation. The term “in voluntary isolation” aims to describe that these peoples reject contact with anyone outside of their own people, generally thought to be an intentional decision informed by the utterly harmful impacts of previous encounters. Historically, cases of contact of such groups with “the outside world” have led to death and great decimation of these peoples. They are extremely vulnerable since they possess no immunological defense to common diseases(2).

The remoteness of these areas, however, also provides a perfect cover for illegal activities such as logging, mining, wildlife poaching, and drug trafficking, many of which are accompanied by illegal road construction which opens the access for others to follow. At the same time, in some cases, the state has promoted extractive activities in these areas, threatening the lives of these individuals. 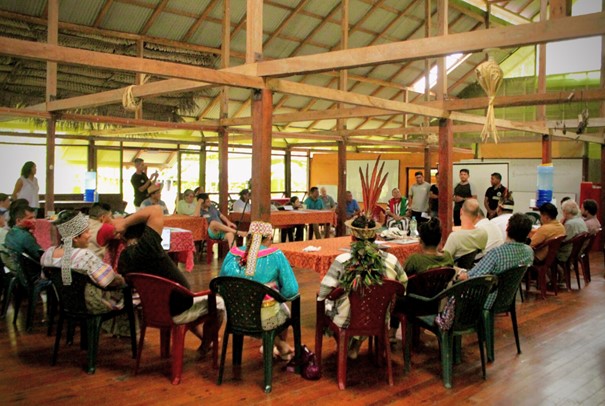 The goal of the event of the Chaikuni Institute was to further define key aspect of an initiative which aims to perpetually protect an area of largely intact rainforest that is home to the largest number of indigenous peoples living in voluntary isolation. Credit: Mirjamsvideos

The legal situation and protection status of the areas which are inhabited by these isolated peoples on either side of the border is very different. In Brazil, the constitution from 1988 orders the state to protect indigenous peoples, including the ones living in voluntary isolation. Many Terras Indigenas (TIs – indigenous territories) have been created for this purpose, as well as a government body (FUNAI(3)) with the mandate to protect these areas and its inhabitants(4). The Terra Indigena Vale do Javarí in Brazil, part of the corridor initiative discussed at the event last week, is one of the largest TIs in Brazil, roughly the size of Portugal. FUNAI has recognized the existence of at least 14 uncontacted groups in the Vale do Javari, estimating a total of at least 2,000 individuals(5). Unfortunately, the Vale do Javari is under great pressure from illegal fishing, hunting, logging, mining, drug trafficking, cattle ranching, and missionary activities. Sadly, earlier this year, it made international news as Brazilian indigenous rights activist Bruno Pereira, and British journalist Dom Philips were murdered by illegal fishermen(6).

On the Peruvian side, indigenous organizations had to take the lead for the protection of the lives of isolated indigenous groups. In the 1990s, the first five territorial reserves for indigenous peoples in isolation were established(7). Under the leadership of regional indigenous organizations (ORPIO, ORAU) and local federations (Feconamncua, Feconbu), with the support of the national umbrella organization of indigenous Amazonian peoples (AIDESEP), eight additional such reserves have since been proposed. Some of these proposals are almost two decades old, but the state only recently started to take a more proactive role to advance some of these proposals. Furthermore, starting in 2011, based on strategic and scientific field studies, member organizations of AIDESEP have been promoting the idea of two large territorial corridors for isolated peoples, an approach which may be described as a mosaic of different protected land categories – indigenous communities, protected areas, and territorial reserves for isolated peoples. Together they form two vast territorial corridors, which offer an integral and more effective way to protect both the isolated groups as well as the rich biodiversity of this region. 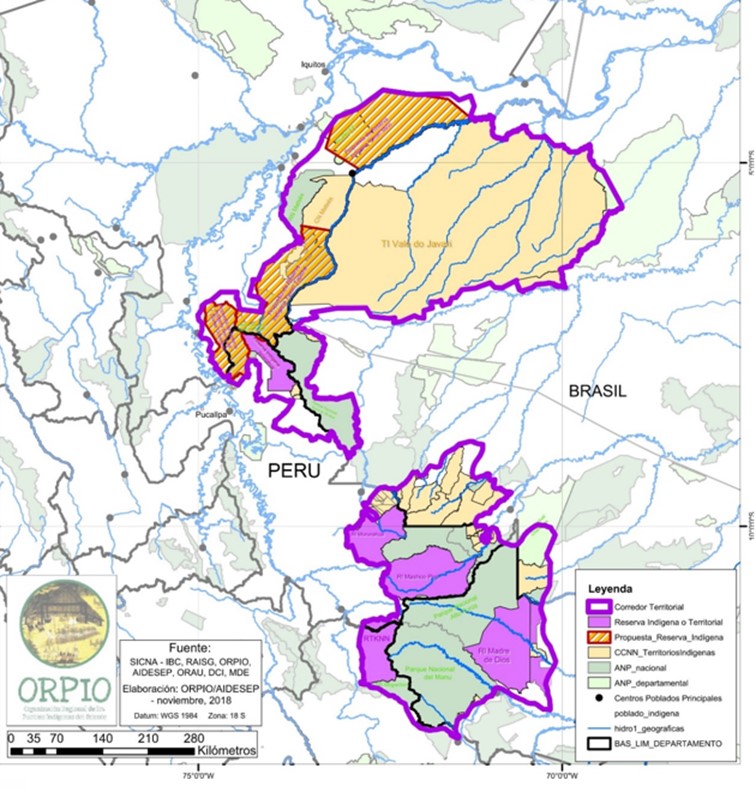 Above: Map of the two proposed territorial corridors to protect isolated indigenous peoples in the vast boarder region between Brazil and Peru. Map elaborated by Lino Huertas (2020), courtesy of ORPIO. Reprinted with permission.

While some important advances have been made during recent years in the process of creating new reserves and recognizing the importance of protecting the isolated groups in Peru, there has, however, also been strong opposition. In our Loreto region, economic interest groups organized in a self-proclaimed Coordination Committee for Sustainable Development for Loreto(8), which ran aggressive public information campaigns denying the existence of isolated peoples, attacking the indigenous organizations which try to protect them. The Committee disavows the fact that rigorous studies have been carried out to assess the existence and whereabouts of isolated groups during the categorization of the proposed reserves(9). Surprisingly enough, many of the members of this Committee are linked to extractive companies, which have interests and operate (potentially illegally) in some of these areas. Its primary spokesman has furthermore been sentenced for corruption(10).

In the face of these serious attacks, the indigenous representatives and its allies gathered at the Chaikuni Center seized the opportunity to draft and sign a declaration to denounce such acts, call on the state to advance the protection of the isolated groups, protect the indigenous human rights defenders, and embrace the corridor initiative. The full declaration can be read here .

A Crucial Time for a Bold Initiative

It is a crucial time for protecting the Amazon rainforest and its peoples, especially the most vulnerable ones. Scientist fear that we are approaching (or have already reached) a tipping point, where parts of the Amazon turn into a Savannah-like ecosystem, which will also change global climate patterns that affects us all. Though financing for rainforest protection is increasing, and large new pledges have been made during the last UN Climate Conference, an important study by the Rainforest Foundation Norway shows that the funding is not reaching the indigenous communities which lead the protection on the ground(11).

The Corridor Initiative is an indigenous led, bold, necessary, and game-changing initiative, which aims to protect 25 million hectares of largely intact rainforest, its biodiversity, the indigenous groups living in voluntary isolation, and improve the livelihoods of communities in the buffer zone which are actively protecting it. By doings so, it also contributes greatly to carbon storage and climate change mitigation. As such, it should be a no-brainer for any large international funding mechanism interested in climate action to support this proposal.

During the meeting at the Chaikuni Center the participants further defined strategies, objectives, milestones, and prioritized activities to protect the corridors in the short, medium, and long term. The next vital step will be to finish a concrete proposal and seek powerful donors to support this initiative.

At the Chaikuni Institute, we are happy to have been able to offer our Permaculture Center as an inspirational space and workplace for such an important gathering. We are fully aligned with this significant initiative which aims to protect a unique bio-cultural heritage for humanity. 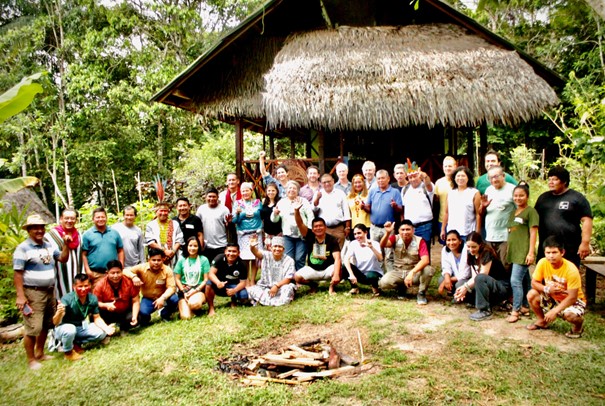 By Stefan Kistler, executive director of the Chaikuni Institute in the Amazonian forest, nearby Iquitos, Peru

(2) The common term for these groups is “Indigenous Peoples in Voluntary Isolation and Initial Contact” – PIACIs for their abbreviation in Spanish. This definition includes groups that have recently sought contact, i.e., are in recent relationship with indigenous communities and society in general. For further information on this topic, we recommend this reportfrom the Inter American Commission on Human Rights: http://www.oas.org/en/iachr/indigenous/docs/pdf/report-indigenous-peoples-voluntary-isolation.pdf

(4)Unfortunately, during Bolsonaro’s presidency with its aggressive promotion to expand the agricultural frontier and its anti-indigenous peoples policies, FUNAI has largely been dismantled, funding decreased to a minimum, and the de-facto protection of the indigenous territories crumbled.

(5) See for example: https://www.theguardian.com/world/2011/jun/22/new-tribe-discovered-amazon?INTCMP=SRCH. This article, however, was published in 2011. The study published by ORPIO in 2021 identified 17 uncontacted groups but was not able to put an estimated number of individuals. Access the publication here: https://drive.google.com/file/d/16D9ngfUFWZVGKQx7e_HR3t3m99BBwmBk/view

(6) Several close friends and colleagues of Bruno Pereira were participating in the event at the Chaikuni Center, determined to take his work and struggle forward.

(7) By then, tragedies had already happened, the most known case being the contact of the Nahua People in the Southeastern Peruvian Amazon. Following the first contact of the Nahua with loggers in 1984, almost 50% of their population died of respiratory infections. See for example: https://news.mongabay.com/2019/05/mercury-poisoning-chief-among-health-problems-facing-perus-uncontacted-tribes/

(9) These studies are, however, classified to some degree. Giving away the exact location of the isolated groups would also offer groups with different intentions to locate and contact them, which would expose them to great risk.