Supriya Vani interviewed many Nobel Peace laureates with the goal of inspiring people to work for peace. She wrote a preliminary article about her book for the website of Peace SOS, which can be found here.

The Women Nobel Peace Laureates are all beyond brave and inspiring and it is hard to mention only a couple of them. Bertha von Suttner wrote the book Die Waffen nieder! (Lay Down Your Arms!). The efforts of Jody Williams resulted in an international treaty banning anti-personnel mines. Malala Yousafzai is known for her advocacy of girls’ education in Pakistan. Luckily, she survived the Taliban attack on her. Ellen Johnson Sirleaf became president of Liberia, African’s first woman head of state. She believes that we can attain world peace by ensuring that freedom and dignity for every human being is respected everywhere. Leymah Gbowee witnessed killings, suffering from the war in Liberia as well. She saw the film Gandhi and realized that non-violence is ultimately far more effective than violence. Leymah launched the Liberian chapter of the Women in Peace Network. Tawakkol Karman is a Yemeni journalist and human rights activist and politician. She declared: “I am a universal citizen. The earth is my homeland, and humanity is my nation.” Interestingly, she also explains to Supriya that Islam, like other religions, respects women, and no practice that undermines the status of women is attributable to Islam.

Wangari Maathai poured her heart and soul into Kenya’s Green Belt Movement. She wrote: As I told the foresters and the women – you don’t need a diploma to plant a tree. Shirin Ebadi is an Iranian lawyer advocating women’s and children’s rights. Rigoberta Menchú Tum published her first book in 1981, My name is Rigoberta Menchú, and This is How My Conscience Was Born. The book describes the suffering of Guatemala’s indigenous peoples during the Guatemalan civil war.

One chapter is devoted to Aung San Suu Kyi. This famous prisoner of conscience freed Myanmar from a half-century of military dominance. With great respect, I read the paragraph in which Supriya describes how Aung San Suu Kyi prevented a bloodbath by being willing to give up her own life. Aung San Suu Kyi became State Counsellor of Myanmar. However, as mentioned in the book, it was during this same period that the crimes against humanity were perpetrated against the Rohingyas..

I had the chance to meet Supriya, we attended a peace symposium together. She addressed the situation of the Rohingyas to the Commissioner of Human Rights of the United Nations. Supriya’s book Battling Injustice truly inspires people to become active for peace, human rights and nature. That is what we need today more than ever. 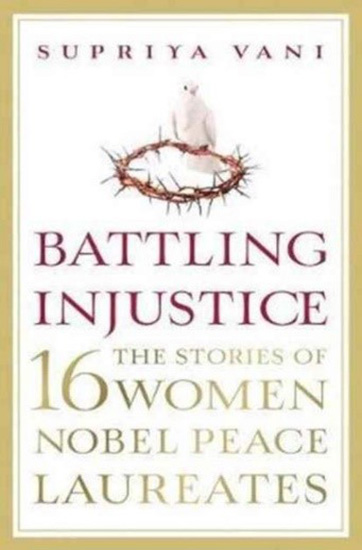