A preview of the upcoming book ‘Battling Injustice’ 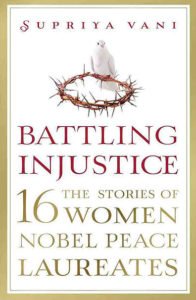 The Iron Lady of the Middle East – Tawakkol Karman.

The moment I think of Tawakkol Karman, who at the age of 32 was awarded the Nobel Peace Prize in the year 2011, an intense desire arises in me. It is that the UN should fix a date and time when all men and women of all countries wherever they may be at that appointed date and time should pay a standing ovation to Tawakkol Karman: not for suffering excruciatingly for standing up against president Ali Abdullah Saleh’s oppressive and repressive regime in Yemen, not for braving the mortal threats she faced and continues to face, for which the Select Committee of the Nobel Peace Prize paid due adulation to her “as a courageous lady who has never heeded threats to her own safety,” not for being the second youngest woman recipient of Nobel Peace Prize, but because I feel that she is someone who possesses an innate conviction that man was born free and cannot be chained – a belief that is eminently manifested in her thinking, in her every breath, in her very being, in all her activities, in all her protests against the mighty, in her courage to defy the veil, in her courage to die for freedom. In 2005, She co-founded Women Journalists Without Chains, a human rights group to promote the freedom of expression and speech in her country.

She declared: “I am a universal citizen. The earth is my home land and humanity is my nation”.

There is yet another laudable assertion she has made:

My position is determined by my beliefs and I do not ask anyone’s permission.

In 2011, in an interview with the Yemen Times, she gave a clarion call to women to defy all attempts at their marginalization. She proclaimed:

Women should stop being or feeling that they are part of the problem and become part of the solution. We have been marginalized for a long time and now is the time for women to stand up and become active without needing to ask for permission or acceptance. This is the only way we will give back to our society and enable Yemen to achieve the great potential it has.

Tawakkol Karman is someone who greatly stresses the need to create universal sisterhood, which I believe is a sine qua non for making any meaningful progress towards establishing abiding world peace. The summum bonum of my writing this narrative is to inspire all young women to rise up, come to the forefront of all human affairs and give a clarion call to eradicate every sort of weapon from the world in the first place, and then to go on to eliminate fear, hunger, injustice; and above all, to endeavour to help knit the whole world into one family in which one member instinctively reaches out to the other members of the family in all situations.

deze blog is geschreven in 2016